One of my favorite things about old roses, in addition to their wild habit, wonderful scent, and vintage look, is that many of them are propagated by cuttings and grown on their own roots.

Native roses are hard to find, but heartier, healthier, and longer-lived. When you order them from specialty nurseries, they are shipped in bare root containers like the one pictured below.

The great thing about older rose varieties is that they are no longer protected by plant patents and can be propagated legally. Many modern roses, such as hybrid teas, floribundas, and many of the newer David Austin varieties, are propagated by the budding process, where licensed breeders, usually licensed to distribute patented varieties, take plant material from the variety they want. rootstock

This process allows rose growers to produce them quickly, efficiently and on a large commercial scale. These are large, bare root grafted roses and the first roses I planted in the cutting garden. 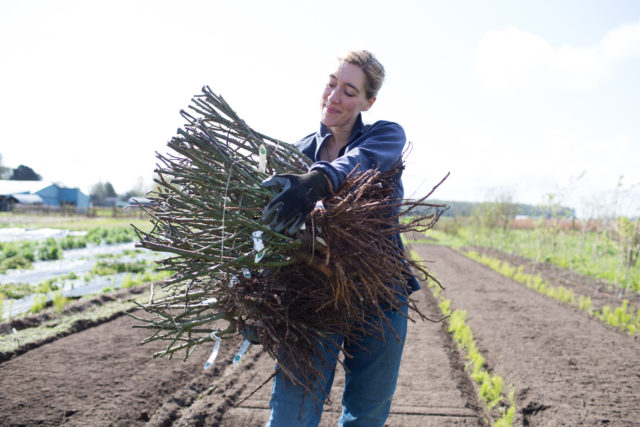 In my experience, the disadvantage of grafted roses is that they are generally not as hardy. If they are exposed to extremely cold temperatures, the top half of the grafted variety will die and the rootstock will live without you noticing until next season when it blooms with an ugly red/red single flower! If a non-grafted (own root) rose is killed in the ground, it will grow back to its type, which is great for gardeners in colder climates. In my experience, I have found that native plants are generally healthier and live longer.

Although I prefer to grow my own rooted roses, this is certainly not required, and I still have several grafted varieties growing beautifully in my garden. But given the choice, I prefer to buy my own root when they are available. It should be noted that the distribution of patented varieties is illegal. Rose patents last about 20 years, so if there’s a variety you’re thinking of promoting, you’ll want to make sure at least 20 years have passed. I’m no expert when it comes to propagating roses by cuttings, but I’ve had decent success over the years.

There is so much conflicting advice out there and it can be overwhelming when you start researching different methods – there are so many ways you can do it. For me, it’s a numbers game when it comes to propagating all kinds of plants, especially flowers. I buy as much slime as I can, knowing that many can’t.

So the more I do, the better chance I have of getting it right. After realizing that we could take cuttings from Anne’s collection, which was an unexpected surprise, I wanted to do everything I could to ensure that we had the highest possible success rate for this project, so I contacted Burling Leong. Burlington roses who generously shares his expertise (one of my favorite sources for rare and heirloom varieties). Burling recommended that we set up a misting system with a fine mist nozzle so that the cuttings can get good air flow as well as adequate moisture.

He recommended a mixture of two-thirds perlite and one-third peat moss or coconut husk, and recommended using 50- or 72-cell trays instead of pots because they don’t require a lot of soil or space and we had a lot of cuttings. .

On his advice, I made a liquid rooting hormone into a powder called Hormex, which is very easy to use. To prepare the cell trays, we mixed perlite and peat, wet it and filled the trays with the mixture, pressing them down on the table to remove air pockets.

Then Jill went over with a pencil and pre-drilled holes in the center of each cell until it hit the bottom of the container. Then the pots were ready to receive the cuttings. While we were at Anna’s, we cut about 12-inch rosebuds (it was the thickness of a pencil) from the plants, sorted them by variety, and transported them from her garden to our farm in water containers. Once back at the farm, we processed the cuttings, cutting each long cane into smaller pieces with at least three internodes (leaves) per section.

We then removed the lower leaves, usually leaving a set of leaves at the top of the stem, unless they wilted during the journey. Then we dipped the tip of the stem into the root powder and slid them down the pre-peeled holes in the cell tray and gently firmed the soil around the stem. After the trays were filled with cuttings, they were labeled with the cultivar name and date and placed under misters that appeared every hour for a few minutes throughout the day.

Then the hard part began…waiting to see if it worked. Generally, cuttings take 4-6 weeks to root, sometimes longer depending on the variety.

After we saw the white roots starting to form and the bottom of the cell pot, we very gently transplanted them into larger pots to give them room to spread. These delicate little cuttings will spend the winter in the greenhouse (kept above freezing) and then transplanted back into larger pots in the spring as new growth begins.

I think we will grow them in pots for at least a year before planting them in the garden to make sure they have the best chance of survival. If you are a rose cutting expert and have any tips or tricks to share, I’d love to hear them in the comments section below.

In the next post, I will share a little more about my favorite specialty in the states, rose gardens and how we grow roses on the farm.

Please note: If your comment does not appear immediately, sit tight; We have a spam filter that requires you to approve comments before they can be published.

The Story of the Floret Workshop Part 2

The Story of the Floret Workshops Part 1

No comments to show.

Mice and Rat Solutions for the Winter Months

Anlo State will soon establish the University of Information Technology

Ask the gardener: the uphill battle with goutweed